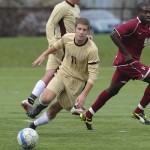 This Saturday, the Bloomsburg University men’s and women’s soccer teams will be taking the field against the East Stroudsburg Warriors. Even though it’s a home game, you might see more red in the stands than traditional Husky maroon and gold — at least BU Soccer Coach Paul Payne hopes you will.

The Huskies will be collecting “Cash for Cancer.” Donors will receive either a red sports water bottle, a red wristband, or a red t-shirt based on the level of their donation. Why all the red?

Coach Payne created the Red Card Cancer program back in 2009 to raise awareness and research funds for the fight against cancer. He was inspired to do so after the loss of Joe Bochicchio, his friend and mentor and Scranton University Soccer Coach to melanoma and Charlotte Moran, the longtime executive director of the Eastern Pennsylvania Youth Soccer Association and administrator for the Region 1 Olympic Development Program to pancreatic cancer in the same year.

In that first year, 16 college teams and 1 high school team from Pennsylvania schools were involved in the Red Card program. Since then, it has expanded nationally. The most recent edition to Payne’s Red Card team is the Major League Soccer team for the nation’s capital: the DC United.

The idea is simple: any team can designate a Red Card game to raise cancer awareness. “Teams do it all different ways,” Payne explained. “The potential is limitless.” Bloomsburg University will observe their Red Card day the way they have since Payne first introduced the idea: they will wear Red Card shirts during warm up and offer the Red Card gifts for donations during the soccer games and at other locations on campus this weekend as well. “We’ll have a table set up when you come in to the football game and the (soccer) teams will be down at the Kehr Union on Friday at a donations table as well,” He said.

Payne said that, with the help of the internet and social media, the program is garnering attention from some surprising sources. The LiveSTRONG foundation has reached out to them and they have received words of support from Major League Baseball, and American Youth Soccer Organization. “The World Cup organization is following us on Twitter now,” Payne said. “This is such a grassroots thing…there’s basically three of us!”

Any fan who wishes to donate to the program but is not able to make it to the game can still help out by texting “Red Card” to 20222 and a $10 donations will be made to support the research of John Hopkins Kimmel Cancer Center.

[UPDATE: Due to the National Weather Service forecast for snow this weekend, games may be postponed. Please check with BU Sporting Events hotline at (570) 389-2828 or online at buhuskies.com before heading to any games.]