Tony’s Lunch, on Main Street in Bloomsburg, is a seemingly normal place to grab a quick bite to eat, but it is a truly unique establishment with a history even just as surprising as its “Fluff Burger.”

The origin of Tony’s Lunch and their famous “Screamer” began in Girardville in the 1940s, explains Joseph Salukas, owner of the current Bloomsburg establishment. “Tony Fulginiti was in the military and while he was stationed in Texas, he got the recipe off a man there for the Screamer Sauce.”

After realizing many students and other members in the Bloomsburg area were traveling all the way to the original Tony’s Lunch in Girardville, Joseph Salukas and his wife Angie decided to open shop in Bloomsburg as a branch of the original.

“We were looking for a good place to open up, and Bloomsburg was perfect,” says Joe.

Like the original in Girardville, the walls of the Bloomsburg restaurant are covered with dollar bills. 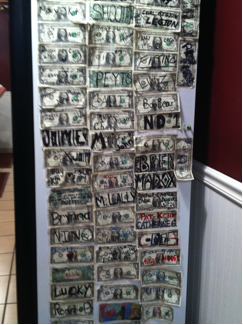 “It started off as a dollar from the first customer, and then all of a sudden everyone wanted to put a dollar on the wall.”

While it is not nearly as extensive as the walls in Girardville, some customers have put their dollars on the fridge at Tony’s in Bloomsburg. The dollars aren’t simply decoration, however. Salukas’s family was able to donate a couple hundred dollars for breast cancer research from all of the dollars they had.

Tony’s Lunch has a small menu offering burgers, hot dogs, fries, and cheesesteaks. All can be ordered with or without the spicy screamer sauce, but perhaps the most interesting item on the menu is the “Fluff Burger,” which is a hamburger with screamer sauce, cheese, onions, and marshmallow fluff.

Lindsay McAndrew, a Junior at Bloomsburg University, has been eating Fluff Burgers for years. “I tried a fluff burger the very first time I ate at Tony’s, without screamer sauce. One day I tried the fluff burger with the sauce, and I’ve been eating it ever since.”

To most people, even the words “burger with marshmallow fluff” sounds strange, but not to the customers at Tony’s.

McAndrew defends the Fluff Burger from those who would turn their noses at such a concoction. “You really just have to try it to see how good it is. It’s sweet mixed with hot. It’s just a great combo.”