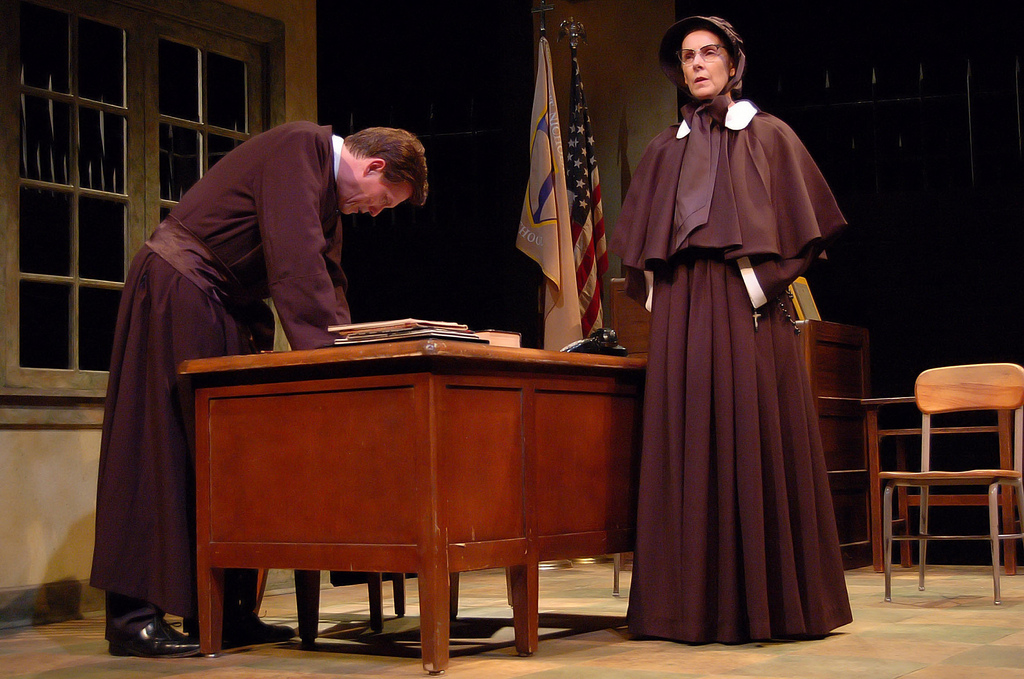 Founded in 1978, the Bloomsburg Theatre Ensemble performed for three summer seasons in the Central Columbia Middle School “cafetorium” before moving in to the former Columbia movie theater in downtown Bloomsburg.

From their home at the Alvina Krause Theater, named in honor of their founding artistic director, BTE has become not only what American Theatre Magazine hailed as “a perfect illustration of ‘commitment to place’” but also a nationally recognized and respected leader in the Ensemble Movement. Members have travelled the globe while developing new works, honing their skills, and passing on the lessons they’ve learned to other community ensembles. And while the ensemble continues to go outside the borders of town to explore, learn, and teach, the experiences are ultimately brought home and shared with us.

When I asked Mark Valdez, the Executive Director of the Network of Ensemble Theaters (a national coalition of ensembles), about the Bloomsburg Theatre Ensemble recently, he had this to say:

“Bloomsburg Theater Ensemble is one of the nation’s flagship ensembles.  The company are among some of the most talented in the nation, as evidenced by the recent, highly prestigious honors given to [ensemble members] Jerry Stropnicky with a US Artists award and Laurie McCants with a Fox Fellowship.A distinguishing characteristic of the ensemble is their relationship to their community. We often talk about how arts benefit communities, but we rarely discuss how communities benefit the art.  BTE’s work is strong because their relationship with the community is strong.  The choices in their programming (i.e. FLOOD STORIES or THE GUYS) become conversations with the community, not driven by artist ego (i.e. “look what we’re doing for you”) but by the fact that they themselves are community members asking themselves the same questions their friends and neighbors are asking (i.e. “what do we do about this?  What do you think?”).”

Some of the ensemble members took a few moments to answer our questions recently. Here’s what they had to say about their production of “Doubt,” their current season, and what the Ensemble has in store for the future:

Many of us have seen “Doubt” on the big screen. How does the BTE production differ from that popular interpretation of the story?

Elizabeth Dowd (Sister Aloysius in “Doubt,” Ensemble Member): While the film is wonderful and has excellent performances by all, I prefer the play.  Because movies have to use many locations as part of their storytelling, the tension gets diluted in my opinion. I also like never seeing Donald Muller – he is voiceless and he is a victim whether you think [Sister Aloysius] is right or Father [Flynn] is right so it is a powerful choice that we only hear about him- never see him.

James Goode (Director of “Doubt,” Founding Ensemble Member): I did not really watch the film; I played it on mute with captions so I could see the period design of props and costumes. And I watched some with the playwright’s commentary.  But what I’ve read about the film is that it was skewed towards believing Sister Aloysius over Father Flynn. The play script itself does not do that; it is entirely balanced so theatre viewers grapple with their own opinions.

Can you talk a little about the reaction audiences had to “The Guys” given the subject matter and timing of the production? How successful was the boot drive in the lobby?

Richard Cannaday (Ensemble Member/Director): The response we heard was overwhelmingly positive. There was no way of knowing just how resonant the piece would end up being. We wanted to provide a place to heal and I think we satisfied that to a small degree. The boot drive went well, although we would have liked to have benefited more companies. They were pretty busy with other things at the time, though…

I am so enamored of the original community-based plays you have created and produced over the years, starting with “Letters to the Editor.” How did those original plays come about?

James Goode: LETTERS was clearly a text-based show on that we were inspired by the printed words from the newspaper. This lead to more documentary based shows such as HARD COAL. Jerry [Stropnicky]’s involvement in community-based plays in Georgia and Kentucky have directly inspired FLOOD STORIES and GRAVITY HILL.

Gerard Stropnicky (Founding Ensemble Member): I’ve also directed a dozen more community-based plays — I call them Theatre of Place — in several communities in Appalachia and the Deep South.  Several more are in the works.

James Goode: The inclusion of these kinds of shows has been an evolution over the years. Our school touring shows have always been original scripts developed from (early on) folk literature and (more lately) documentary historical sources. It was probably inevitable that this kind of script development would creep into our mainstage, but it took a while to get that courageous.

Any plans to update “Flood Stories?”

When can we expect to see the highly anticipated “Fair Stories?”

Richard Cannaday: The company is very excited by this project, but as with any story of this scale, we’re taking our time to do it right. Of course the cancellation of the Fair this year changed the perspective a little and the timeline. When we reconvene, there will surely be discussion of the Fair that never was, and the effect it’s had on our community. When FAIR PLAY finally comes to our stage, it will be a tribute to the traditions that make Bloomsburg so unique.

Looking ahead to the next Main Stage production, I notice in the calendar that the first preview of “Holiday Memories” (Friday, November 25th at 2pm) is a “Food Preview.” What’s going on?

Richard Cannaday: Food Previews are a long-standing tradition of ours. Instead of an admission price, BTE collects non-perishable food to pass along to our local food cupboard. In this post-flood Bloomsburg, we welcome food donations at any time. We’re looking for as many ways to give back to this community as possible because without our local patrons, donors, and various partners, we wouldn’t be here!

The out-of-print book version of LETTERS TO THE EDITOR is available for sale in the Alvina Krause Theatre at the lobby concession stand.