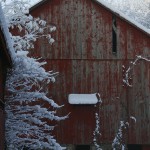 Last weekend, the weather played quite a trick on the Northeast, including the Bloomsburg area. Snow of varying amounts fell across Pennsylvania, as shown in a National Weather Service State College Office public information report. Amounts ranged from an inch up to just over a foot, an impressive snowstorm for January, much less October. Halloween decorations in a Christmas-y natural scene made for quite an unusual sight last Saturday night.However, we are back to more normal early November weather, giving us a chance to take a look at what may happen when winter finally arrives. There are a variety of weather outlets that release winter season forecasts. Let’s take a look at who is releasing these forecasts and what they have in store for the Susquehanna Valley and surrounding region.

Temperature-wise, the National Weather Service (NWS) says that Bloomsburg has equal chances of seeing above-, near-, or below-normal for the winter season. However, there was one caveat. The “wild-card”, as the NWS calls it, is the Arctic Oscillation (AO), an index that forecasters pay attention to closely in the winter. If it is negative, then we often end up cold. If it is positive, we can end up mild. The NWS is concerned that when this turns negative, we could get bitter cold arctic air masses this winter.

Precipitation-wise, we also have equal chances of seeing above-, near-, or below-normal for the winter season. The NWS does note that snow could be above normal if timing allows storms to arrive when cold air arrives.

AccuWeather foresees near-normal temperatures and normal to slightly above-normal snow for the winter season. They believe that winter’s worst weather in Pennsylvania will happen in northwest Pennsylvania and the Appalachians. There, frequent lake-effect snow outbreaks and cold air masses will make for a cold and snowy winter.

AccuWeather said that a few significant snow and ice events should hit the area. They expect most of the winter’s snow events to happen in December and January.

A private forecasting firm owned by Dave Tolleris, WxRisk’s winter forecast is for a cold December with normal temperatures in January and February. Mr. Tolleris believes there will be a fair amount of eastern and coastal lows, leading to normal precipitation in December but above-normal precipitation for January and February. This seems to indicate a chance for above-normal snow.

The Farmers’ Almanac is a bit different than the rest. They are predicting above-normal temperatures for the Bloomsburg area for the winter season. They are also predicting a stormy time, with lots of rain and snow. They believe the best chance for a big snow is in February, as a lot of the storms early might be mixed or rain.

The Old Farmers’ Almanac is different than the Farmer’s Almanac. They are going for a slightly milder than normal winter but with above-normal snow. That may sound odd but it is possible if the timing is right for storms and cold air.

As you can see, there is some variance in the forecast but it seems like we will have our share of wintry precipitation events this winter. So perhaps last Saturday was our dress rehearsal.