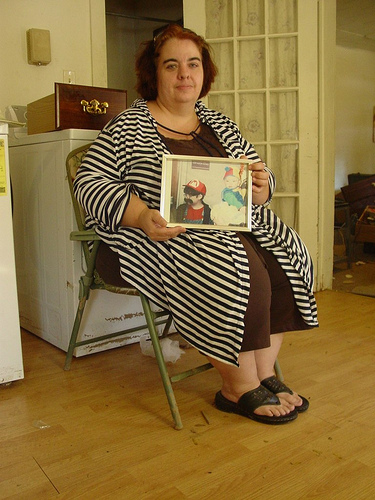 Warm October days, cool crisp evenings, the noise of saws and hammers, slowly dwindling piles of debris. All of these sights and sounds makes one think that a month after the flooding caused by Tropical Storm Lee, life is starting to return to normal in Bloomsburg.

But for Tina Parks Erb, her husband Marlin, and their sons Kyle (17) and Walker (8), things are far from normal. For them, their neighbors in the west end of town, and all families affected by the flood, new worries and dangers abound.

On Wednesday, September 7th the sheriff’s office alerted Mrs. Erb and her family that Fishing Creek was rising and, with no time to put any of their belongings up out of the water’s way, the Erbs had no choice but to evacuate. When they returned to their rental on Sunday, September 11th to view the damage for the first time, the Erbs discovered 3-4 inches of water and mud had covered the entirety of their first floor apartment. The basement had flooded to a depth of 7 feet, and Mrs. Erb estimated that the water remained there for another 4 to 5 days.

The water is gone now, but the repairs are far from complete. Mrs. Erb stated that she was informed by her landlord on Thursday, September 29th that the apartment was cleaned, treated for mold, and that everything was acceptable for her and her family to move back in. She, however, doubts her landlord’s assessment.

A few repairs are complete. “The flooring in the front of the house has been replaced, the carpet too,” Mrs. Erb indicated, but she is unsure whether that matters with the wet mud still in her basement. “You can see the paint starting to bubble up on the wall.  The floor is warping, and that wood holding down the new floor is pulling away from the wall,” she says of the new base moulding. Older, original moulding is still caked with dried mud.  “I don’t think any of this was cleaned.”

Four days after her landlord assured her the apartment was safe to return to, an inspection by the Town of Bloomsburg Code Enforcement Office confirmed Mrs Erb’s fears. A copy of the inspection report, obtained by The Bloomsburg Daily, noted that there was a “mold condition in [the] basement.”

The Code Office’s report (dated October 3rd) also indicated that much damage was still present and many items needed to be either repaired or replaced, including:

“In addressing the subject of electrical components located below the flood elevation, all electrical devices such as switches; receptacles; light fixtures; circuit breakers; disconnecting devices and the like, must be replaced [emphasis added]. This is not only a consistent policy of this office but it is the position of most (if not all) electrical agencies.”

At the time of this interview on October 7th (four days after the inspection which noted the replacement of all receptables below water level), the original electrical outlets in Mrs. Erb’s residence still appeared to be the unrepaired originals.

The report concluded that there were “minimal repairs at time of inspection.”

Mud and damp carpeting still remained in the basement on Friday, as well. The water-logged wooden basement stairs gently bowed as this reporter went downstairs to survey the damage and the piles of mud. “This place is not fit to live in,” said Mrs. Erb, motioning to the mold that is beginning to grow in the first floor corners of her still-damp home.

Jen Ralston reports on the the proper way to remove mold and to dry your home in this Bloomsburg Daily article, posted 6 October.

Mrs. Erb still has doubts about her apartment’s safety and has yet to return home. The family continues to live in the same motel they evacuated to on September 7th. “Code Enforcement has done what they can do at this point,” she said, but that seems to be of little comfort to her. She stated that she had not heard anything more from either that office or her landlord since the original inspection and she’s uncertain about who to believe or what truly needs to be done.

In her time of trouble, Mrs. Erb’s empathy and concern also turns toward her neighbors, equally as afflicted as she, “They’re afraid to do anything [about possible safety hazards] because they need a place to stay.”  Wondering about their futures she says, “It’s weird how the community’s changed. I feel people forget that there are still victims and there will be flood victims for years. I worry that people will forget that.

“I worry about the long term effects and and the fear some people have about speaking up. What happens to people whose homes don’t get fixed right? What are they going to do long term? Where are they going to go? I’ve seen people working on [repairing their homes] by themselves. I see an older couple across the street, he’s just going on doing it by himself. Who’s helping him?”

While speaking of her neighbors, Mrs. Erb’s eyes came to rest on a picture of her sons; a picture several years old, of her children dressed for Halloween. “This is what family is. This is what home is. I lived here.”

A lifelong resident of Bloomsburg, Mrs. Erb feels a strong attachment to the town where she and her sons grew up. Yet that connection isn’t as strong as her concern for her children. Mrs. Erb is particularly worried about her younger son Walker, whose health condition makes him susceptible to mold spores.  She was warned by her doctor that excessive exposure to mold could induce seizures. “Those boys are my life, and no one will jeopardize them.”

The morning of the interview she was hopeful that she found a new home for her sons — one she felt safe with, without the dampness and growing mold, but outside of town and away from where she and her family have lived for years.

She looked around slowly at her children’s toys, the keepsakes her sons had pulled from trash piles, memories that others had tried to throw away. “I don’t know about anyone else,” she says, reflecting, “but we’re not coming back.”

In speaking with the Code Enforcement Office, The Bloomsburg Daily has been informed that there will be follow up inspections. Residents, however, are strongly encouraged to contact that office at (570) 784-7123 for a follow up inspection as soon as the repairs indicated on their preliminary inspection sheets are made.