Premiering on Thursday, April 26, at 8:00 p.m. in Carver Hall, students of the Telecommunications Department at Bloomsburg University directed this series of short films about love, lust, and relationships on a college campus. 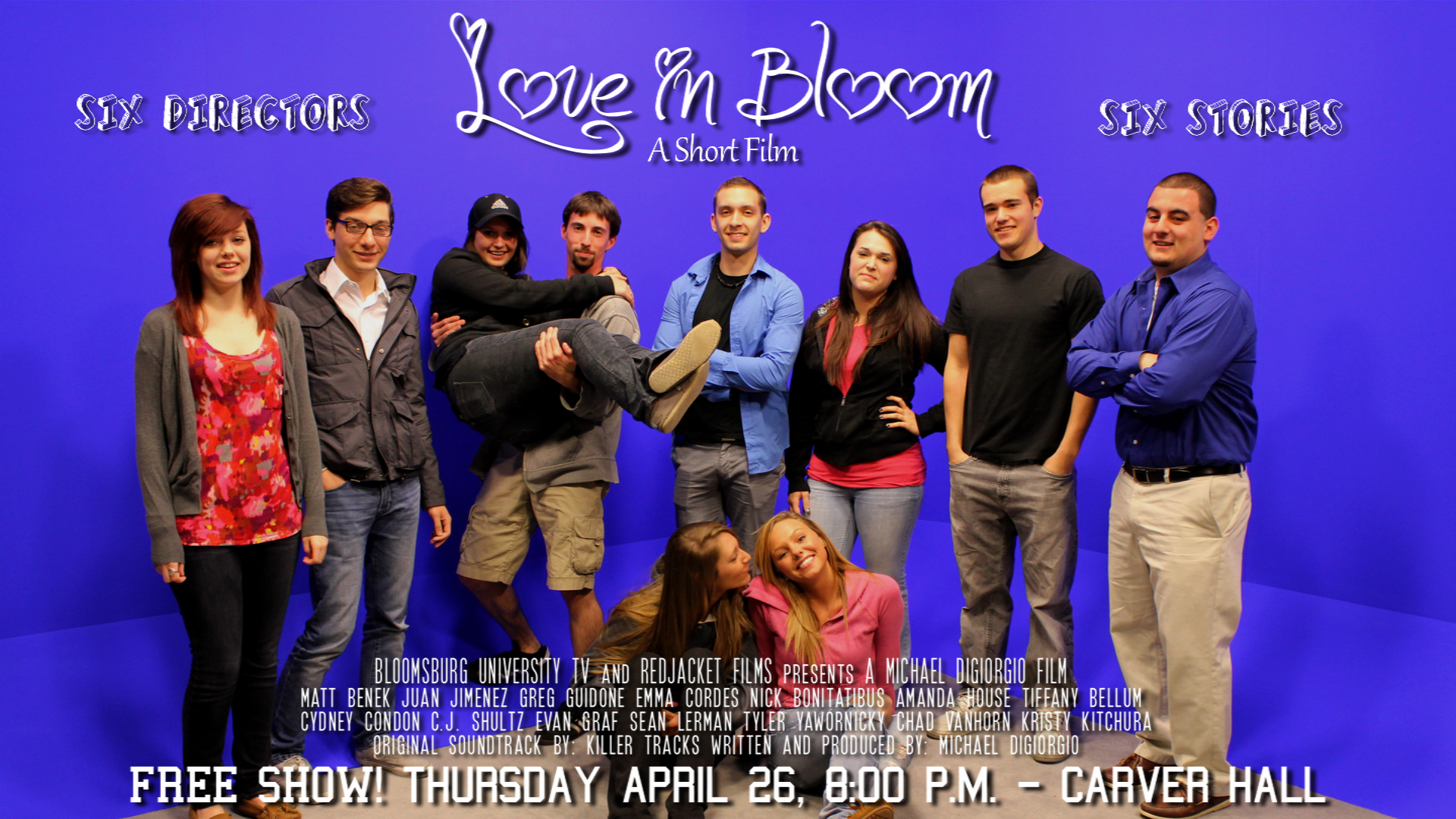 When walking into the back of room 1247 in McCormick, a person would expect to find a classroom or a normal office. But hidden in the back are a set of movie posters, and behind three large Mac monitors is a 27-year-old man who has already changed Bloomsburg University or at least the Mass Communications Department.

“I liked video production since high school because it was something to do rather than write papers,” Michael DiGiorgio, manager of Instructional Media Services, says. His career at the university started with his lack of interest in writing papers. “My friends from high school and I would have to write long papers about Julius Caesar so instead of writing them, we would do the film,” says DiGiorgio.

He attended Stockton College and majored in Video Production/Communication. He also did a summer internship at the New York Film Academy where he wrote his first short film, Natalie, which is highlighted on a shelf behind his desk along with his other films he created over the years. “It just seemed like the best major for me because I was already interested in it and I was good at it so I just continued it to college,” DiGiorgio says.

The turning point in DiGiorgio’s career was not in school but during the time he ran his own company and produced a video for a local DARE program in Franklin Township, New Jersey.

“We put this fifteen-twenty minute video together and it was like a dance off with the police officers and stuff. It was really silly.” But, the kids in the auditorium ended up screaming their approval.

“It was the craziest thing I’ve ever seen because these little kids were loving my work which was odd to me because I never experienced anything like it,” says DiGiorgio.

Now, DiGiorgio has older kids who look up to him. Chad Vanhorn, a sophomore telecommunications major, wasn’t exactly sure what DiGiorgio did at the university. “He was quiet but once I got to know him, I found he is really helpful and all around a nice person,” Vanhorn says.

DiGiorgio found coming to the university was a step up from what he was doing. “I was doing a lot of basic production work and freelance work for NBC and Comcast and any other company that I could find,” says DiGiorgio.

The university also gave him the opportunity to run his own studio. “It was hard to pass up when I saw all the things I would be able to do here.”

Since his arrival at Bloomsburg University, DiGiorgio has changed the entire studio. “When I first came here, we were all analog, very little digital. We did all the editing on a hard drive,” says DiGiorgio. He added HD equipment, green screens, blue screens, added more editing areas for the students and created more opportunities for students to produce their own shows and movies.

DiGiorgio’s latest film he wrote and produced was created in the fall. His ideas were written on a Word document describing quirky characters and six short stories of college romance. He chose five students to direct the short films, and Vanhorn also directed and played a main role in the movie. “He did a wonderful job with the script and had a great vision on how it should turn out,“ Vanhorn says.

After working diligently on the movie for almost five months, Love in Bloom has finally come to life. “He was positive on allowing us to be creative and work on our own ideas,“ Vanhorn says.

DiGiorgio’s short film will appear in Carver Hall Thursday, April 26 at 8 p.m. and another poster will be added to his wall and another DVD put on the bookshelf behind his desk waiting for his next creative idea to incorporate the BU students. “This film is something I wouldn’t be able to accomplish without the help of student workers,” DiGiorgio says. “Without the students, we couldn’t do a lot of the programming that we do and we wouldn’t have a lot of the content that we are actually able to produce.”