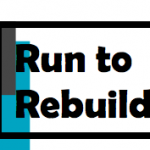 When Ginny Larson and Brooke Wilson met as graduate students in the Student Affairs program at Bloomsburg University, they had very little idea that they would eventually work together to become disaster recovery organizers.  Larson, a Bloomsburg native, 2004 graduate of Central Columbia High School, and 2008 graduate of Bloomsburg University, was drawn back to town for her masters degree for this simple reason:  “I love the area.”  Wilson, a native of Rockport, Massacusetts, discovered Bloomsburg when she decided to pursue her masters and received a graduate assistantship in the Sports Information office at BU.

Both, however, were incredibly affected by the flooding and destruction they witnessed following Tropical Storm Lee.  Larson, who has called the area home since she was 8 years old, said,  “I was devastated. I know we have had  flooding problems in the past but once I was able to drive downtown and see the destruction, I cried so much I could barely even drive. [This town is] a part of me and who I am. Seeing it demolished was heartbreaking, and I was one of the lucky ones not harmed.”  Wilson compared what she saw in Bloomsburg to New Orleans after Hurricane Katrina.

When the two returned to campus after the flood closure, they instantly knew they had to help.  Wilson said, “I knew I needed to plan something that would be a big event to help those in need even if it would be months later. Many people seem to forget that families and people had lost so much and that they still are in need of help, although the damage my not be seen it is still there.” Several of their peers in the Counseling and Student Affairs program were affected and forced to relocate, which made the destruction all the more personal.  According to Larson, “Although many of us will never forget what happened, we wanted to do something that showed we hadn’t forgotten, symbolize community support, yet was uplifting and fun. That is how the Run to Rebuild 5k walk/run was born.”

After working with their program advisor, Mark Bauman, and Jean Downing, the Director of the SOLVE office, the idea began to take off.  Larson and Wilson are working with the Bloomsburg University’s Student Veterans Assocation to hold the event, and have received extensive support from the Bloomsburg YMCA, the SOLVE office, and multiple fraternities and sororities.  All proceeds will be donated to the Columbia County Volunteer Organization for Disaster Relief. “The event was organized in such a small amount of time, but we hope to have a great turn out to show the community we are here for them,” said Larson.

According to Larson, it should be a full day of community events, “Following the race, the Veteran’s Day parade is being held in downtown Bloomsburg. In addition, at 1:00 pm Bloomsburg University’s last home football game against Lock Haven will be taking place. If you bring your race bib, you will even get half off your football ticket!”

For more information or to join their community, go to Run to Rebuild 5K on Facebook.

Update: Due to the response from the community, we are kicking off The Bloomsburg Daily Charity Challenge.