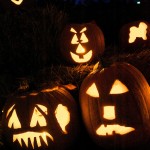 It’s time to break out the candy corn, dust off the skeletons, and hang the spider webs. This week’s edition of “Remember When…” takes us down memory lane to, where else? Halloween.

How was Halloween explained to you as a child? I remember being told the story of All Hallow’s Eve in elementary school music class while listening to Mussorgsky’s “Night on Bald Mountain.” Does anyone else remember that?

Laurilyn Witherup-Bailey has some elementary school Halloween memories that are funny now but at the time, maybe weren’t so amusing to her:

“I remember in elementary school always trying to stump the teachers, who had to guess which kid was underneath the costume.  One year, I had the bright idea of wearing a nylon stocking over my head underneath my hot, rubberized mask–so as to better fool whoever was peering into the mask’s eye holes.  We had to first parade around the school before the teacher could start to guess identities, and by the time we got back to the class I was so uncomfortable I was crying and begged the teacher to guess me first.  Unfortunately, she couldn’t understand me very well due to the nylon and the rubber mask (and probably my sobbing didn’t help), and she couldn’t offer a guess as to who I was, so I took off my costume without being called out. That was my one and only year with those rubberized masks.”

“Every Halloween we had a parade around the parking lot. The deal with St. Columba was that we all had to dress up as our favorite Saint.  What that meant was that you would have something like 100 kids all dressed in white robes, rope belts, and wire hanger halos.  Everyone looked exactly alike. The memory makes me laugh even now as I type it. Imagine passing by and wondering what the heck was up with that! It had to have been the lamest way to celebrate Halloween.”

Kristin Ziesloft-Camplese has fonder memories than her husband of selecting costumes. She writes:

“My mom made a lot of my costumes (for 5th grade I waddled around as a pumpkin), but on the off years, I remember going to Nichol’s or Ames and buying the entirely plastic, cheapo costumes.  Do you remember how they smelled? And they were in little boxes with clear fronts?”

I remember those, Kristin! Remember how they were stacked on the shelves in piles and you had to look at the top of each box, to see the mask and find out which costume it was? I had a clown and a Wonder Woman box costume, but I really wanted to be Batman…

Once we got to the middle school, most of us who were artistically inclined got a chance at some point to paint a window uptown for Halloween. I can’t remember what my design was, but I know I was assigned the police station and was not happy about it. What’s the fun of “playing hooky” uptown all day if you’re going to be watched by “The Man?”

“I remember we did this in middle school as part of Mr. Ryan’s art class… we got to go down during the school day in 8th grade. My brother Josh and I painted the window of Serruci’s pizza, if you remember where that was. By the end of the day, we were pretty pleased with the results. I think we painted a night scene with a pumpkin and black cat under a scary tree. It was spooky for sure!”

Mia Kiefer offers these memories of her childhood Halloweens in Bloomsburg:

“My favorite memories included planning our costumes. We didn’t go to the store and buy them ready-made. We had a big trunk in the attic that contained all the costumes from Halloweens past. It was crammed full of scarves, hats, masks, pants, and piles of assorted other pieces. We would spend hours combining this and that until we had exactly the look we wanted. When we were all set, we’d start off–always with Mom or Dad following along. We only went to the houses of people we knew. We would never consider just going up and down the street outside our neighborhood like so many do today. Our neighbors would actually try to guess who we were and sometimes made us sing a song before we got our treat. Nobody worried about tainted candy or anything like that. We were safe and we had a great time.

Then we reached the age where we didn’t need our parents tagging along anymore. The costumes were forgotten and we thought we were the ‘baddest kids in town’ because we soaped a few windows and threw some corn at houses. And the neighbors didn’t disappoint–they would come to the door and flick the light on, acting like they were going to string us up. We’d hide in the bushes down the street, hoping they wouldn’t give chase.”

And finally, not to be outdone, our resident Master Rememberer, Jack Edwards, remembers when Halloween was “like an offshoot of April Fool’s day:”

“You soaped windows, threw shelled corn kernels, and knocked on doors and then ran and hid. I think that’s long gone too. Today you’d get arrested or shot, and understandingly so. Within reason, it seemed to be allowed back then and was acceptable behavior on Halloween night.

One Halloween back in early the 1960s, I ventured up into Sherwood Village and met up with some friends for an evening of ‘Halloweening.’ My friend Ray Cronover kind of took charge — the man with the plan so to speak — and we walked the neighborhood looking for mischief to get into. Apparently, this wasn’t Ray’s first Halloween as PA State Police cruisers were circling by and close at hand. Ray knew each and every one of the officers on a first name basis!

All of a sudden, there it was, a house left unattended with the garage door open! ‘Let’s take all the stuff inside and put it on the roof!’ (Luckily, there was a ladder too.) Quickly, we worked as a team and Ray got up on the roof and arranged things where he thought they should go. Just as we stood back to observe our work, the S.W.A.T. team moved in. ‘Ray, you and your friends put all that stuff back right now and we won’t have to get your father involved.’ So, we did.

I sincerely miss my old friend Ray and those too few years of growing up in my hometown of Bloomsburg. I bet most people won’t remember, but Ray’s dad was head of the state police barracks on West Main for years and years. Maybe a lot of people won’t remember that, but I sure do.”

For more of Jack Edwards’ Halloween memories, follow this link.

To add your Halloween memories to the collection, add a comment below.

7 thoughts on “Remember When: Halloween”