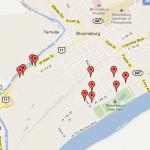 People have been using maps to share information for thousands of years. First used as simple illustrations to plot paths from location A to location B, maps have evolved into rich information sources. In the age of the Internet and the rise of simple and powerful tools like Google Maps, normal people now have the power to create new forms of maps that mix detailed information with locations. These new “mash-ups” are able to provide information to people very quickly and easily.

In many ways, people are using simple techniques to build powerful and sometimes life-saving maps to quickly share information about locations. Take for example the Maps4Aid site that uses mapping technologies to allow normal people to help fight violence against women in India. Following the devastating Japanese earthquake, Safecast was developed to depict a heat map of country-wide radiation readings. And a more simplistic example, but nonetheless an important one, is Lost Pet Atlas. If you have lost a pet, you can provide some very basic information so that others can see where the pet was lost and how to help by visiting. I think it is safe to say that mashing location data with deeper information is a perfect match for helping people in times of crisis.

As the weather reports began letting people know that significant flooding was going to occur in the Bloomsburg area, many people began asking questions about the safety of their homes. Wanting to know if they should stay or evacuate their residences, many people went looking for information about the location of the flood plain, water levels, and how the predicted rise of Fishing Creek and the Susquehanna River would impact their location. Faced with the news that Bloomsburg could see record rainfall levels, many were left without any easily accessible information about how to make informed decisions about their location. I have heard from several Bloomsburg residents that they were told to find a neighbor who lived there during the 1972 flood and ask if it is safe. That is an unacceptable response.

With that in mind, The Bloomsburg Daily has started a project to informally collect, share, and map stories of the affected areas in Bloomsburg. The way it works is you fill out a short form and we dynamically plot that location on a sharable Google Map. While at the moment all that we are showing is the actual locations of flooded homes, we will eventually be able to share the stories. This will give Bloomsburg a quick and easy reference point to refer to in the absence of a neighbor who lived through the 1972 or 2006 or 2011 floods.

So please take a moment and share your story at The Bloomsburg Daily’s 2011 Flood Map page, or for time being in the form below. Think of it as a community history project that can not only allow us to help one another, but also provide a long-term record of what happened in September of 2011.