Remember When: The Sounds of Memory

For those of you that don’t know, aside from my status as migrant journalist for The Bloomsburg Daily, I am a professional sound editor. If you don’t know what a professional sound editor is exactly, don’t worry; most people don’t. It’s generally understood from seeing all the “behind the scenes” documentaries on TV and the DVD bonus materials that it takes a large crew to make what goes up on the screen in the finished product seem so, for lack of a better word, real. But it’s not just hair, makeup, lights, and set designers who create the illusion because movies are not just moving pictures. They are moving pictures with sound. 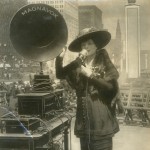 We all know when we are watching a movie that certain things have been played with to make the picture look the way it does: in addition to makeup artists and costume designers, there may be special effects (like computer generated graphics) or stunts (gun and fist fights, car chases). And we all know that when we watch a scene, it’s been constructed from a series of shots that, in some cases, are filmed over the course of not just hours but days or even weeks. A lot of attention gets paid to how things look on film. But even more things are changed in the sound than in the picture.

As a sound editor, I have changed the accents of characters and sometimes, swapped their voices out entirely for someone else’s. I have altered the dialog in other ways, too. I have changed a performance from sad to angry or flat to funny by swapping out the performance of the lines with that of a different take. Actors rarely say things the same way twice so when I find a new performance, I shave words or stretch them out to fit in new spaces, raise or lower the pitch of an actor’s voice to match the mood of the original performance, slow things down, or speed them up as needed.

Sometimes the actor says the wrong thing and I put different words in their mouth entirely and often I am called upon to bring actors back into the studio to re-record their lines for any or all of the above reasons. And that’s just what a sound editor does to dialog. Every foot step, punch, car horn, helicopter pass by, dog bark, bird tweet, door slam, gun shot and alien spacecraft lifting off has been created, recorded, or selected and then placed by a sound editor. Whereas movie audiences routinely admire the skills of the visual team – how good the actress’ hair or makeup looked, how cool the special effects were – when I do my job right, no one even knows that I’ve done it; sometimes, not even the director!

In thinking about the importance of sound (and hopefully, making it a little more important to you, too), I have come across a couple of interesting articles on the internet lately. One, from last year, is about emotional memories.

Is the reason why the sound of a dentist’s drill can put many people into a state of instant anxiety because where the brain processes what it hears and what it remembers about other times it heard that sound is, in essence, filed in the same place?

And then there’s this article, which reminds me of an experience my friend Aaron Hurley had recently. It occurred to him that his kids all grew up with call waiting and voicemail and he wondered, will they even know what a busy signal is? Aaron did some research to find the answer:

“I individually asked six kids aged 8 to 15 (8, 9, 11, 13, 14, 15). Even I was surprised that the older kids were just as clueless as the younger ones. In fact, even after explaining the whys and hows, only the 9-year-old seemed to have any vague sense of what I was talking about.

You see, she’s a pretty dark kid and it was her exposure to age-inappropriate cinema that allowed her to remark, ‘Oh! Like in a scary movie when the phone won’t work?'”

Isn’t it amazing how, in just the last decade, technology has changed our lives so much that not only do we not know how to wait for anything but we don’t even know what a busy signal sounds like anymore?

The ramifications for my career are one thing that these articles highlight for me: how people feel about something is linked to how it sounds and which sounds they have in their memory already. But think about it this way – there may be a person or event you haven’t thought of in years and then you hear a song and suddenly, you are right back where you were the first (or last) time you heard it. Of course the way all the senses work is linked to memory – not just hearing but also sight, touch, smell, and taste. But naturally, I’m more interested in emotional memories tied to sounds. So here’s my little sound experiment. Care to participate?

What do you think of when you hear this:

6 thoughts on “Remember When: The Sounds of Memory”