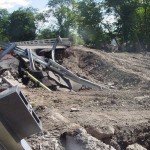 I came to Bloomsburg over 25 years ago. Our first home in Bloomsburg was right next door to Ash and Naunas on East Street and we became lifelong friends with Bob and Jeanne Naunas. They sold the house and business a couple of years later to Al Lenzini, another great man. A little over a year later we looked for a home of our own.

Having two children at the time and not much saved we found a home along the creek that was lovely. We lived there for almost 20 years before the flood of 2006 claimed most of our belongings on the first floor. We had experienced only one basement flood prior to that. From the very beginning in Fernville, we experienced a deep sense of community.

It was an amazing place to raise children. Even my cat would wander next door, visit inside with my neighbor, Irene, and then come home half an hour later. We lived most of the years there without even a key to the house on our keychains. My neighbor bought his house from a family who couldn’t even produce any keys to their house.

We knew we were in a flood plain though much of the housing we looked at was in the same situation. From what I understand, with this flood, approximately 30% of Bloomsburg was flooded. We purchased flood insurance and paid it faithfully. The creek was a place we boated, swam, looked for turtles, skipped stones, and listened to while snoozing in the hammock. Yes, at times, it was to be feared and respected.

In June of 2006, we learned how quickly the creek could rise to extremely dangerous levels. We were supposed to evacuate on Wednesday morning but Tuesday night, our first floor filled with water and we were trapped as were several of our neighbors. When the water receded we all got to work cleaning and gutting our homes, taking inventory of the losses, and beginning the steps necessary to rebuild.

We managed to secure a couple of contractors and after quite a process, rebuilt our home by the end of October. We made some great improvements and once again enjoyed our lives there. There had always been talk of a flood wall or a buyout.

I joined the Flood Authority and stayed on it for three years. Many in Fernville had concerns about the design flaws in the Army Corps of Engineers plans. There had been no consideration of the hills/mountains and runoff in the design on the Fernville side. Surface water flooding is absolutely not covered by flood insurance. Many others were frustrated that the high school, sewer plant, and other areas by the river would not be protected. I took a course on Surface Hydrology and tried to learn everything I could about flooding. The other Flood Authority members were tremendously respectful and even though our opinions would differ at times, we learned about the process together.

Unfortunately flood protection takes years to design and government funding is sadly limited while restrictions and studies are tremendously abundant. At this point the best thing that could happen for those wanting a flood wall in Bloomsburg would be if Fernville got bought out. The land could become a flood plain and the wall would not need to be designed at such a major height. Of course there would need to be several more studies, probably lots more studies – time and money spent without ever achieving any desired result.

Frustrating but unfortunately it’s our experience with the ACOE. In ten years we have completed lots of studies but have not benefited in actual flood protection from the Army Corps of Engineers.

The concerns I continue to have involve increased building and paving projects (such as Walmart, Lowes, Buckhorn etc.,) insufficient drainage capacity, building on wetlands, increased flood protection upriver, the build up of debris in the creek including islands that had trees and shrubs growing on them, and possibly even climate change that raise the levels, frequency, and intensity of new flooding.

We watched the flooding from across the street this time around. Hot tubs floated down Drinker Street along with appliances, parts of decks, other structures, and propane tanks that were the size of small cars. My shed traveled 2 or 3 blocks down the street.

After the water receded we were able to rescue our raft and some tools. Our pavillion firmly set on concrete footings was completely ripped out. It’s a good thing my son convinced me to move our canoe up the hill. A deck from up the street landed against our deck and was topped by a roof from a garage two houses away. I lamented that it wasn’t fair to get a garage roof if I couldn’t have the walls to go with it.

We were spared the major foundation damage that occured on West Main St. I have a feeling that the debris piled up on the lower bridge blocked the water from moving down the creek and helped to cause much of the damage to those homes.

We had almost five feet of water in our first floor. The filthy water stayed in the house from Wednesday afternoon until Saturday. It left behind a layer of mud and debris that smelled slightly of fuel oil. Almost all of our belongings were destroyed though we actually rescued a couple of fish from our basement. Prior to the flooding, a wonderful crew from BTE came down on Wednesday afternoon to try to help us save what little we could. We had to send them away in less than an hour as the water was covering the street and the bridge would soon be closing. Luckily they saved most of my husband’s music equipment, a treasured chest, a friend’s desk, some art supplies, most of our books, my china, and my desk files. The entire contents of the first floor other than those things were completely ruined.

I remember thinking that the river crest was only supposed to be 25.4′- as predicted by the weather service. We would soon learn that the crest on Friday reached 32.75′. A slight difference of over 7 feet.

From the very first day the water receded, help poured in from everywhere. Family members, friends, and strangers showed up with food, cleaning supplies, bottled water, and their offers of help and places to stay or shower.

Our neighbors on the hill shared their homes. We even had a crew from the army show up across the street at the infamous sign (“SEND BEER”) with a case of beer. One of my friends from Bloomsburg left her flooded home across the creek and wheeled over two coolers of drinks to share. Beth Mauk, Eric Miller, the Food Bank, churches, BHS and BU sports teams, the Red Cross, AGAPE, Salvation Army, and several others organized teams of people came to help with the clean-up and provide meals.

Friendly faces warmed our hearts daily. Our township was phenomenal. Scott Traugh had arranged to have dumpsters before the flooding even occured. Scott, Mike VanDine, and the rest of the officers kept us informed and safe. Fred Klinger worked night and day. We couldn’t ask for more from our township.

Unfortunately most of us have had a terrible experience getting our flood insurance money from the National Flood Insurance Program. We found out last week, 6 weeks after filing our claim, that our adjuster either resigned or got fired. We met with a new adjuster and started over from scratch on Saturday. It will be at least another month before we get the insurance money on the home we own. Two other close neighbors share the same adjuster and are in the same predicament. So many of the homes are condemned. They sit empty with all the utilities still off and no decisions made as far as rebuilding or demolishing.

We, unlike many others, have been lucky enough to be able to purchase a new home to live in. First Columbia Bank, our realtor, Mike Fritz, and our lawyer made it all possible. The sellers were extremely generous and allowed us to move in before our closing. They even were so kind as to give us a couch… one that we can’t get off because it’s so comfortable. It’s funny because we still have a view of Fishing Creek but we are completely out of the flood zone. We also can claim Bob Naunas again as a neighbor – he lives a couple of houses away from us! My new neighbor, Connie, brought us cookies the first week we moved in! I still am amazed that nobody died in this devastating flood and I am constantly reminded of the kindness and generosity that filled our lives following the flooding. So many have donated time, energy, money, furniture, food, and loving support. We are truly blessed by this community.

The View from Here

The View from Here: Snowy Day

4 thoughts on “The View from Here: Melissa D. Matthews”