The Women’s Center: Rebuilding Lives While Recovering From the Flood 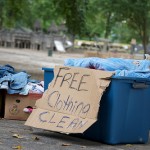 Of all the buildings damaged in Bloomsburg by September’s flooding, there is one whose address we cannot list. We can’t photograph the outside of it or even tell you who lives there:

It is the emergency shelter of The Women’s Center.

As the domestic and sexual violence crisis agency for the area, The Women’s Center(TWC) provides not only emergency shelter but extensive counseling services and legal support, and is one of the first centers of its kind in the state to offer medical advocacy for victims of domestic and sexual abuse.

TWC’s Executive Director, Zabrina Finn, along with a staff of twenty, had already noticed an increase in need for their services before the flood due to the recession, as she explained in a recent phone interview.

“In more affluent times, (more victims) had the ability to leave a bad situation, but now they’ve lost the means to help themselves,” she said. “Now, they don’t have any other way.”

For a facility that helps people in times of personal crisis, the addition of a larger-scale crisis brought new challenges. The Center’s emergency shelter, which was not in the flood zone, sustained basement-level flooding which destroyed the children’s counseling area, the shelter’s food storage area, and various pieces of equipment. The shelter also now has structural issues stemming from the flood.

While TWC receives funding through several state and federal sources (including the Pennsylvania Coalition Against Domestic Violence, the United Way, and the Violence Against Women Act), according to Finn, “the challenge is always resources. The community is stretched very thin. Our funding streams are getting smaller every year and we have to rely more often on the local community for donations and assistance.” Despite those hurdles, she is adamant that TWC will continue to provide the same services at the same level. “We have to do it,” she said. “It’s necessary.”

Those services include, in addition to sheltering and aiding victims, providing public awareness and education programming – which is vital because many victims do not come forward and ask for help on their own. Programs not only encourage possible victims to seek help but also teach people of all ages how to avoid dangerous situations. It’s also important to learn to recognize the signs of abuse, to identify victims who need help and are afraid to ask for it, Finn said. Presentations are key, she believes, because they teach people that domestic violence can affect anyone – even if they are not a direct victim of abuse.

For example, Finn said, “If you’re a manager and an employee comes to you and tells you that they have a PFA (Protection From Abuse order) – what do you do? What is your responsibility?” TWC is available to give presentations on everything from stranger and internet safety and tips on dealing with bullies to recognizing symptoms of domestic violence in the workplace.

The reason educational programs and community outreach are so important, Finn said, is because “(some people) still think it’s a private thing — you should be quiet about it; ‘You made your bed, now you have to lie in it…’”  It is this attitude of “victim blaming” that often prevents domestic violence victims from seeking help.

Finn also noted that some victims hesitate to ask for assistance out of fear that, having admitted that they are in an abusive relationship, they will be forced to leave their partner:

“I hear this question all the time: ‘Do you make women get a divorce?’ No. Absolutely not. We have designed services around (the victim’s) own safety assessment and what they’re able to do for themselves…if we started telling (them) what to do, we would be no better than their batterers.”

Some victims continue to be married to and live with their abusers while using the Center’s services, Finn noted. Whether a victim is prepared to leave her abuser or not, TWC’s goal, according to Finn, is “to let victims know that this is a place you can come for help without judgement.”

Finn, who came to Bloomsburg in 2005 after graduating from Bucknell, says she chose her career because she wanted to do something worthwhile; she wanted to feel like she “really accomplished something at the end of the day.”

“Domestic violence isn’t going to stop because of what we do. It can only be stopped when the community makes it stop,” she said. “This agency provides leadership and guidance but we’re only twenty people. That a big charge — to have us eradicate domestic violence — we’re not that powerful! But the community is.”

October is Domestic Violence Awareness Month. Those wishing to donate to The Women’s Center, may send a check to their administrative offices at:

That location also accepts donations of clothing and household items in good condition every Tuesday from 9am to 5pm.

You may also purchase a Weis or Giant markets giftcard by going to TWC’s website. Gift cards can be used by individuals or designated to go to another charitable organization (such as AGAPE, the Red Cross, or any church), and every time the card is used, 10% of the value spent will be donated back to The Women’s Center.