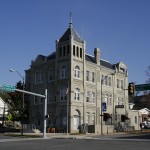 Bloomsburg Town Hall has confirmed with The Bloomsburg Daily that Mayor Dan Knorr, Councilperson Dianne Drosdick Levan, and members of the Bloomsburg Flood Authority all traveled to Washington D.C. on Wednesday morning.  We requested an agenda for their day, but none was made available.

Given the press release from Senator Toomey’s office and letter he sent to the Army Corps of Engineers today regarding the Bloomsburg flood wall project, we did want to see whether town officials were meeting with Toomey.  According to Senator Toomey’s office, they were not scheduled to meet with the senator.

As of Wednesday evening, we have not received any further comments from the town or Mayor. We will continue to follow up and attempt to get comments as soon as they are made available. Stay tuned.