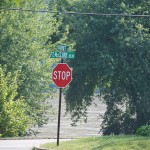 According to a press release from U.S. Senator Pat Toomey‘s (R-Pa.) office, the senator sent a letter to the U.S. Army Corps of Engineers today urging the Corps to conduct a new cost/benefit analysis for the Bloomsburg flood wall project.  The release states:

A new analysis could improve the chances that this project will receive federal funding.  The town of Bloomsburg has been waiting for the construction of a flood wall since Congress first approved the project in the 1990s. The Bloomsburg Area Joint Flood Control Authority estimates that damage to Bloomsburg’s two major employers from this year’s flood may cost as much as $100 million. In the letter, Sen. Toomey writes that a new analysis is needed in light of floods in 2004, 2006 and 2011 to evaluate the true benefit cost ratio of building the Bloomsburg flood wall.

In addition, Senator Toomey wrote a letter to Office of Management and Budget Director Jacob Lew in June. To read the full text of that letter, please click here.

In light of the unprecedented damage caused by this year’s flooding in Bloomsburg, it is imperative that the United States Army Corps of Engineers (USACE) complete a new benefit cost analysis for the proposed floodwall project.

Plenty of new information exists regarding the costs to the town and people of Bloomsburg when Fishing Creek and the Susquehanna River flood. The Bloomsburg Area Joint Flood Control Authority estimates that damage to Bloomsburg’s two major employers from this year’s past flood may approach $100 million. Additionally, it is my understanding that data regarding the town’s flooding in 2004 and 2006 were not used to update the USACE benefit cost analysis.

I understand that past analyses suggest that the project fails to meet the minimum ratio of benefits to costs as required by the Office of Management and Budget (OMB) to be included in the administration’s budget request. However, new information from the various floods that have occurred since the last analysis should be used to give the most accurate description of the project’s merits.

Furthermore, it is vitally important that USACE conducts this study as soon as possible. With these considerations in mind, I respectfully submit the following questions:

1. Is it the view of the USACE Baltimore District that the benefit cost analysis for the Bloomsburg floodwall should be updated? If not, can you please outline the benefit and cost assumptions used in the current estimate?

2. If the USACE Baltimore District believes a new analysis is necessary as well, is it possible to complete the study in advance of the Fiscal Year 2013 budgeting process?

Thank you for your consideration. Please keep my office fully apprised of the developments of this project as they move forward.