A Month at The Bloomsburg Daily 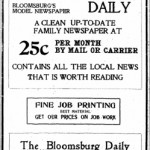 One month ago, this story could not have existed. One month ago, the members of The Bloomsburg Daily team didn’t have a place to call home on the internet and The Bloomsburg Daily was nothing more than an historical reference. We were simply emailing each other talking about how angry and confused we were about what was happening in our hometown of Bloomsburg, PA. We were doing what we thought we could, the things most people who have been trying to help could — we were collecting donations, delivering toys to families who had lost everything, cleaning family members’ homes, and connecting with people on Facebook to try and share what little information we could find.

Then it happened.  We decided to do something everyone thought (and still thinks) is crazy. We decided to start an open, free, and volunteer-based news source specifically for Bloomsburg. We rationalized it by discussing that some people are really good at hanging drywall, laying carpeting, and installing new kitchens; and while the members of our team have the basics of those skills, no one would invite us into their homes to actually work on them. In other words, we needed to find something we were good at in order to make a difference. So one late evening one month ago we were talking about the history of news in town and there it was, The Bloomsburg Daily.

We learned that The Bloomsburg Daily had been the first daily news sheet for the town and we instantly fell in love with the idea of using the things we know to help in a new and different kind of way. From the Bloomsburg University Local Newspapers Collection,

The Bloomsburg Daily, the first daily newspaper published in Columbia County, Pennsylvania, began publication on February 1, 1892 and continued in existence under that name until July 30, 1908 when it became the Bloomsburg Daily Mail. The Daily Mail continued publishing until September 1917 when competition from other local dailies forced its demise. The only copies of the Daily known to exist in microfilm reside at the Pennsylvania State Library in Harrisburg and the Harvey A. Andruss Library at Bloomsburg University. No paper runs of the Daily are known to exist.

Our primary goal from the start was to document and share stories related to Bloomsburg after the September 2011 flood. We knew we didn’t want to focus on headlines to sell papers. We don’t happen to have a printing press so we wanted to ignore the idea of selling papers and focus instead on gathering, writing, sharing, and maintaining stories about our community in a time of great need. For the past month that is exactly what we have been doing.

Our team consists of a handful of dedicated and talented individuals all focused on achieving our mission. Each week we meet virtually to decide what stories we will go after for the week, schedule our assignments, and get to work. Each week we get thrown a curve ball or two; but each week we have tried to bring you stories that matter — stories about our friends, neighbors, and families.

In one month, The Bloomsburg Daily team has grown from the two people who decided this is what we wanted to do to a network of volunteers who make movies, take photos, write stories, and manage our technology platforms. We have gained 550 new “likes” on Facebook, ensuring our news stories get seen by them all and the people they share with. We have climbed into the first page of Google search results, have had tens of thousands of visits to the site, and have been able to connect with countless people in the community as we work to gather and share their stories. In one month, we have outgrown our original design, launched a free classifieds system, built a community events calendar, and established a presence across the social web (including Flickr, Facebook, Twitter, and YouTube).

We don’t know what the future holds, but we do know that when looking at the Flood 2011 category that these stories wouldn’t exist without this crazy idea and the volunteers working behind the scenes. Take the time to tell your friends, share the stories, and lend your voice. This space belongs to us all. And if there are things that you would like to see covered, use your talents to help bring those stories to life.