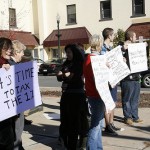 The nationwide protest known as Occupy Wall Street made its presence known in Bloomsburg this past Saturday, November 5th, with a demonstration in Market Square. Organized by Bloomsburg University students through their Occupy Bloomsburg Facebook page, the gathering consisted of local university students and citizens who are concerned with what they see as an improper relationship between corporations and government.

Attracting various numbers throughout the day, with an estimated 25-30 people attending over the afternoon, the demonstrators hoped to call attention to not only corporate influence over politics, but to raise local awareness over the perceived unfairness of society in which 1% of the population controls the majority of the wealth. In an article posted last week, The Bloomsburg Daily examined the Occupy movement as a whole, its goals, its decentralized structure, and the governmental violence it has faced in some locations.

Tyler Dockery, a Bloomsburg University student from Perkasie and one of the organizers of the event, commented on the explosive growth of the Occupy Bloomsburg Facebook group earlier in the week that led to this recent demonstration. “It boomed so quickly,” said Mr. Dockery. “We had 30 members and then in one day it more than doubled in size. [As of Saturday] we’re up to 165.” The group membership continues to grow, with the numbers reaching 264 as of Monday, November 7th.

With such rapid growth in a diverse movement Mr. Dockery commented that, while important, the purpose of Saturday’s gathering wasn’t any one message in particular. Rather the important factor was making people aware and letting them know that individual voices could be heard. “In the future we’re looking to have events with more of a set goal but as of right now we’re just looking to build up more support and just have more people following us.”

Although the group was focused on making their presence known and building support for future efforts, this did not detract from the message and cause that brought them together initially.

John Walker and his wife Sandy came to express their frustration and anger over corporate evasion of taxation. “Exxon and corporations like them are the ones who are getting big breaks on taxes, big loopholes,” stated Mr. Walker. “When you say you got to [eliminate loopholes, but] their lawyers will just find a way around it, well that’s giving up.”

“What has happened is that the corporations are thumbing their noses at the government, they’re saying we don’t want regulation, and if you regulate us we’ll do what we want to anyhow.”

Wendy Lynne Lee, Professor of Philosophy at Bloomsburg University, expressed her concern, touching a variety of issues that the Occupy movement encompasses. “I hope that a number of different but related things will be the outcome of this. I hope that we can see the overturning of the Citizens United [Supreme Court case] that allows corporations to count as persons in the sense that they can contribute unlimited numbers of dollars and effectively buy campaigns, candidates, and influence in Washington. I would like to see the banks regulated in such a fashion that we will not face another mortgage crisis. I would like to see CEOs pay their fair share of taxes. I would like to see the 1% in general pay their fair share of taxes.”

While these and other issues are at the heart of the Occupy movements, Mr. Dockery spoke to the modest, immediate goals of Saturday’s rally while keeping an eye to the future. “As of today I was looking for more of an awareness, getting people to understand that they do have a chance to speak out, they do have a chance to make a difference within our society.”