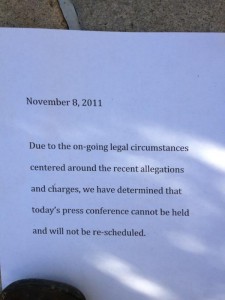 2:23 p.m. – Joe Paterno has left his house and is headed to practice. He said that he wanted a press conference, and Scott Paterno reiterates that nobody has asked Joe to step down.

12:21 p.m. – The New York Times has just reported that Penn State is preparing for Joe Paterno’s departure from the University. Paterno’s 62-season career will end in disgrace. We don’t know exactly when Paterno will leave, but it looks like his career is over, and not by his own choice.

11:32 a.m. – WPVI-TV in Philadelphia has reported that a possible ninth victim of abuse by Jerry Sandusky has contacted the State Police.

May No Act of Ours Bring Shame: The Riot That Never Should Have Happened