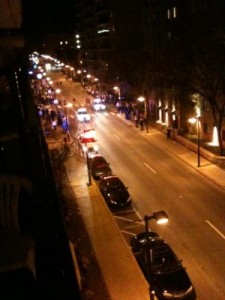 The following is a summary of events related to the Penn State scandal occurring over the past 15 hours.

The Bloomsburg Daily thanks Onward State for their kind partnership and permission to repost portions of their coverage of the events at Penn State. Please visit Onward State’s Live Blog throughout the day for a continually updated stream of news direct from Penn State students.

Wednesday, November 9
12:10 a.m. – We’ve seen multiple tweets that ESPN is reporting that former Pennsylvania governor Tom Ridge is a possible replacement for Graham Spanier if he is indeed ousted as president, or resigns.

Tuesday, November 8
10:42 p.m. – The Penn State Board of Trustees has released a statement.

The Board of Trustees of The Pennsylvania State University is outraged by the horrifying details contained in the Grand Jury Report. As parents, alumni and members of the Penn State Community, our hearts go out to all of those impacted by these terrible events, especially the tragedies involving children and their families. We cannot begin to express the combination of sorrow and anger that we feel about the allegations surrounding Jerry Sandusky. We hear those of you who feel betrayed and we want to assure all of you that the Board will take swift, decisive action.

At its regular meeting on Friday, November 11, 2011, the Board will appoint a Special Committee, members of which are currently being identified, to undertake a full and complete investigation of the circumstances that gave rise to the Grand Jury Report. This Special Committee will be commissioned to determine what failures occurred, who is responsible and what measures are necessary to insure that this never happens at our University again and that those responsible are held fully accountable. The Special Committee will have whatever resources are necessary to thoroughly fulfill its charge, including independent counsel and investigative teams, and there will be no restrictions placed on its scope or activities. Upon the completion of this investigation, a complete report will be presented at a future public session of the Board of Trustees.
Penn State has always strived for honesty, integrity and the highest moral standards in all of its programs. We will not tolerate any violation of these principles. We educate over 95,000 students every year and we take this responsibility very seriously. We are dedicated to protecting those who are placed in our care. We promise you that we are committed to restoring public trust in the University.

10:35 p.m. – The crowd at Old Main continues to grow rapidly. Though the crowd is hardly unanimous in opinion, cheers so far have included “Hell no, Joe won’t go” and “Fire Spanier.” Our estimate is 1000+ people.

10:24 p.m. – According to @evanponter in the HUB and @dennismcnamara downtown, students from both places are headed towards Old Main right now.

10:19 p.m. – Students are tweeting that riot-gear State Troopers have arrived to Beaver Canyon and begun clearing out the crowd. Some are headed towards Old Main.

10:15 p.m. – Students are gathering at Beaver Canyon, at the corner of Beaver Avenue and Locust Lane, where police have also begun to congregate. An early pic via @dennismcnamara…

8:51 p.m. – The Centre Daily Times is reporting that a court has temporarily barred Sandusky from being alone with his grandchildren.

7:34 p.m. – As reported by Politico, Representative Patrick Meehan has urged Education Secretary Arne Duncan to probe “whether federal law was broken in the failure of properly report allegations of sexual abuse at Penn State”

6:45 p.m. – A report on Lehigh Valley Live says that the Board of Trustees will be meeting tonight, by phone.

6:43 p.m. – Fox 29 is reporting that the number of victims in the Sandusky case has roughly doubled since the presentment was first released.