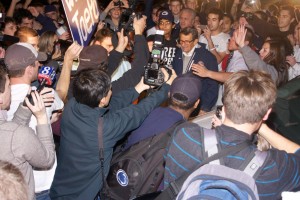 The Associated Press is reporting, and members of the Paterno family are confirming that Joe Paterno will retire at the end of the season, and given the circumstances, I think that’s the best possible endgame he could have hoped for. No firing, no forced resignment. He will get to coach, at least one more time, before his adoring fans, and I can’t even begin to imagine the range of emotions we’ll all have Saturday.

It’s a more dignified exit than many of us thought he’d get yesterday, when the New York Times first broke news of Paterno’s imminent departure from Penn State.

Update: The Harrisburg Patriot-News is reporting that a source close to Paterno said it was the coach’s decision to retire and that he has had no contact with the board of trustees. –TBD

This article was written by Devon Edwards of Onward State. The Bloomsburg Daily thanks Onward State for their kind partnership and permission to repost portions of their coverage of the events at Penn State. Please visit Onward State throughout the day for a continually updated stream of news direct from Penn State students.

A Bridge Over Troubled Streets