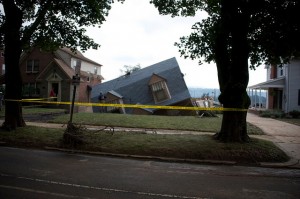 Representatives from FEMA addressed the Bloomsburg Town Council last night, reviewing the particulars of the Hazard Mitigation Grant Program (HMGP) and stressing that people who wish to apply for Acquisition (commonly referred to as Buyouts) should do so quickly. The deadline for submitting a Letter of Intent/Pre-Application has been extended to Wednesday, 30 November. The Application packet submission deadline has been extended as well, to Friday, 30 December.

In light of the deadline extension, Mayor Dan Knorr suggested that a meeting be held with interested Town residents early next week. Update, 16 November: The meeting will be held on Wednesday 23 November at 5:30PM in the Town Hall’s Council Chambers.

FEMA representative Michael Vath stated that 75% of the funding would come from the Federal government with the remaining funds provided by the State. 15% of the provided funds must be used for hazard mitigation projects. Mr. Vath estimated that at the moment $60-65 million is available through the HMGP, but suggested that due to the extent of the damage this number is likely to increase.

Mr. Vath explained that the HMGP is completely voluntary and no private citizen will be included without their consent and application. Mr. Vath also encouraged people who may be considering elevating or repairing their homes to apply as well since applicants may withdraw their application at any time.

One thought on “FEMA Addresses Bloom Council on Buyouts”