48 Years On: Personal Memories of the Kennedy Assassination 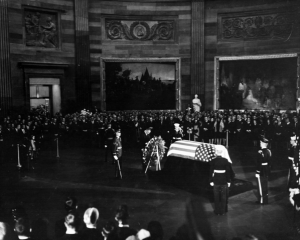 Thanksgiving week usually brings happy memories of holidays past, but 48 years ago today our nation mourned in stunned silence when a President was murdered. Jane Gittler, a Berwick native and long-time Bloomsburg resident was an 18 year old nursing student in Washington, DC in November of 1963. She recalls her experiences in the days following the assassination as she stood in line with thousands of others to see President Kennedy lying in state at the US Capitol.

Washington, D.C., November 22, 1963. I walked out of my chemistry midterm shortly after noon on that Friday. The director of the nursing school which I attended was crying in her white lacey handkerchief. She said that the President was shot. I knew that he and his wife were in Texas because I heard it on the radio while dressing for the day. In later years I experienced the same feeling that I did on 9/11. The United States was in danger. I was 18. He was 46.

It was sunny in Washington as it was in Texas. Looking out of the big windows of the school’s lobby it seemed as if life stopped. It probably did. No buses, no airplanes, little traffic. I suppose everyone retreated home. We watched the black and white TV to keep informed of what was happening and each time the announcer said that some plane or another was going to land at Andrews AFB or Washington National (there was no Reagan National then) we ran outside and tried to find it in the night skies.

I really don’t remember much about the next day, Saturday, but on Sunday my roommate and I took the city bus down to the steps of the US Capitol to watch and try to believe that this was real. We got there at 11 in the morning and the crowd was huge. We picked up three or four college boys (not hard to do) because they had a transistor radio turned up loud and we wanted to hear.

We saw the coffin being carried up the grand steps by the military and then Jackie, the children, the President and Mrs. Johnson and all the members of the Kennedy family as well as other dignitaries of the day. Although they were far away, we recognized them because of all the publicity of the Camelot years.

A sudden jolt hit the crowd as many radios spoke to us of another tragedy. That the man who killed the President was killed while being transferred to another jail. It was too much to process.

We were then organized by the police to proceed into the rotunda of the Capitol. We were let away from the building down many, many city blocks, maybe twenty, before they turned us around in the right direction. I don’t remember eating, drinking, or using sanitary facilities, maybe there were none. As I said previously, we got there at 11 AM and were allowed to pass the bier about ten minutes after midnight. I thought I would get into trouble because we had to be back to the dorm by 12. I didn’t care. I knew this was history. Later that same evening, the papers said that Jackie came back about 2 AM, alone, to pray.

Monday was the funeral. We watched that on a colored TV in the hospital. There were no TVs in our dorm rooms. Wednesday even I took a Greyhound bus back to my home in Berwick, Pennsylvania for Thanksgiving. I was 18 and He was 46. The world had changed.

Author: Jane Gittler is a Berwick native and was a long time Bloomsburg resident. She is currently CEO of Columbia Montour Home Health and Hospice, part of the Bloomsburg Health System.

Photo Credit: This unattributed photograph was sourced from Wikimedia Commons and is in the Public Domain.

3 thoughts on “48 Years On: Personal Memories of the Kennedy Assassination”