Kasey Shaffer is not what you would expect when you meet a professional bodybuilder. Aside from a few trophies, a sound system that any DJ would be proud to use and a room-filling weight machine, her house near Stillwater is cozy and warm, a fitting home for a petite, attractive young lady, a mother of two, a full-time employee at Kawneer and an athlete with goals and dreams.

So it makes sense that she is only too willing to share the secrets of her workout schedules, diet and motivation with anyone who is interested. “At some level, this is a lifestyle that is for everybody,” she said. “And I love to share what has worked for me with those who want to change their lives.”

With about ten years of experience behind her, Shaffer reflected on how she started. “I wanted to lose some weight,” she explained. “So I ate less, but that did not work. Instead, I didn’t feel healthy, and I was still not losing weight.”

So she took stock of herself. “I could have paid to join a gym or have someone train me or learn myself,” which is what she chose. She first quit smoking and then went from an “I can do that” attitude to one that remains today, built on her “I am going to do that” promise and she is still learning.

But a naturally fit body from years of skating, her newly found determination and even a 2001 Hot Rod Magazine calendar shoot were not enough so in 2006, Shaffer was in the audience of her first bodybuilding show, and she liked it. “I watched everything they did, how they posed, how they looked. I spoke with the pros and the judges and asked a lot of questions about what was important and what I could do to be successful in this type of competition.”

The answers she found were surprisingly simple: work on your posing physique and maintain your natural beauty. So her workouts intensified, she attended more shows, spoke with more contestants, read more books, skimmed dozens of magazines and made a commitment to herself to start at the beginning and work her way to the top. Her beginning just happened to be sponsored by the United States Bodybuilding Federation (USBF).

“My first competition was as a Bikini Novice, and I won my division,” she said. “Then, that same day, I came in second in the USFB Bikini Open Division which included the girls in the upper groups. I was hooked.” 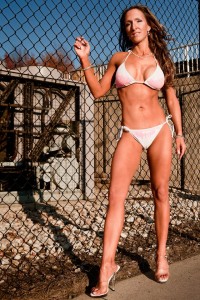 And after consistently winning at the Bikini Novice level, Shaffer is ready for her next challenge, and she found that at the USFB Figure level. Shaffer has to make some basic changes to move from Bikini to Figure divisions. “Bikini is all about a girl being toned and yet still soft,” she said. But the jump took some practice and preparation. “Figure is judged by how muscular and defined you are, and everyone is emphasizing the posing.”

“That was an amazing day,” she said. “But I have a lot more to accomplish.”

Shaffer normally weighs between 124 and 127 pounds in her off-season and cuts down to 107 pounds at 9% body fat for competitions, a reshaping that becomes intense as the date approaches. And all this has to be done naturally, without any steroids or growth hormones since all athletes are tested before every contest.

“On the Friday before the competition, I was eating every three hours, but only foods without sodium which limits my choices to egg whites, rice, green veggies and water,” she said. “That night, I had a small dinner, but after 7 p.m., I stopped everything including drinking water.”

The next morning, check-in was at 10. Shaffer got a spray tan to compensate for the bright lights of the stage, had her make up applied and her hair done. She owns 13 posing suits to choose from, all designed to highlight her best features. The first round began at 11.

After she qualified for the finals, she kept warm and went over her poses, which count as one-third of the total points with the rest coming equally from natural beauty and physical conditioning. She won the finals that night.

Her professional status is going to change her life. “I am talking with two supplement companies about sponsorships. I use their merchandise so I would not be misleading anyone. I want to be able to say, ‘I look like this because of your product.’” Besides supplements, Shaffer takes only protein as part of an unwavering and nutritious diet. 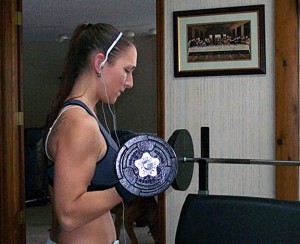 But the one part of her life that will not change is the support of her friends, co-workers and family. “They have been great,” she said about her mother, children, boyfriend and a large group of friends who share in what is essentially a community lifestyle. “Having my family and friends help me at home and cheer me on at contests makes all the difference in the world.”

So it should not be surprising that Shaffer eagerly looks forward to paying back her supporters. She is helping her 15-year old son with his workouts, is working with a local high school’s wrestlers who were battling weight issues, and is training her friends in their homes or in her own facility. “It’s just my personality to help others,” she said, and her advice is likewise freely given to those who are just starting in bodybuilding.

“I went to shows for years and had lots of my questions answered by the pros,” she said. “Some girls come to their first show and are not prepared, but I feel if they do their best and I still win, then I will feel even better about my efforts.” So she offers suggestions that range from posing techniques to the best way to keep a suit from slipping during competition.

What’s next? Shaffer will be joining another federation this spring and has a five-year plan to move up into the professional bodybuilding ranks. “The next steps involve adding more intense workouts, heavier lifting and an even better diet, but because of my metabolism, I can compete anywhere between 105 and 127 pounds,” she said.

And since her dream is to one day participate as part of the International Federation of Body Building and Fitness (IFBB), the home of Mr. Olympia and Ms. International competitions which are the highest level of competitive bodybuilding in the world, she is surely going to surpass everyone’s expectations, except her own.