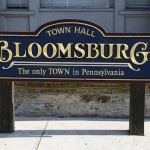 Ostensibly what appeared to be yet another in a long series of meetings with federal government representatives and officials, instead presented a strong, united front of local government, business, and community leaders. Local representatives traveled to Washington to impress the common goal of preserving local industry and jobs, and sparing the residents of Bloomsburg yet another devastating experience.

Speaking of the importance of bringing community leaders together for a face to face meeting with federal legislators, Mayor Knorr stated “They have a lot of issues [to deal with]. They’re physically removed in DC and we wanted to be sure they knew what is a priority for us.”

“They were impressed at the broad range of cooperation, and that made a difference to them. Seeing them eye to eye, that we’re all on the same page, that was a primary purpose of this meeting.”

Council Member Diane Levan agreed. “They were amazed at how everyone had come together on this,” she said. “It’s unfortunate that it took this disaster, but they welcomed us, listened, were very concerned with our priorities and met with us in good faith.”

In addition to the unified front and goodwill felt at the meeting, both Mayor Knorr and Council Member Levan emphasized the specifics of what help Bloomsburg needed from the federal government. In particular this means a new Cost-Benefit analysis performed by the Army Corps of Engineers to determine to what extent, or if, the federal government would provide funding for the floodwall project.

“We know that [money] is tight at the federal level,” said Mayor Knorr. “This doesn’t mean projects aren’t happening, but they need to be prioritized.”

Although Senator Toomey was unable to attend this meeting in person due to commitments on the US Congressional Budgetary Supercommittee, sending instead members of his legislative staff, the Senator has already sent a letter to the Army Corps of Engineers, asking them to complete a new Cost-Benefit analysis for Bloomsburg in light of the recent flooding. The Senator’s letter identified the new analysis as “imperative” and “vitally important.”

The common front presented by community leaders, and their insistence on a specific course of federal action is already seeming to have an effect. Both Mayor Knorr and Council Member Levan expect the Army Corps of Engineers to begin their new analysis by the end of the year, possibly within the month.

“We can give millions to other countries when there are floods,” said Council Member Levan. “But manufacturing jobs are hard to come by. It’s going to take some meaningful effort to help the people in our own town who have gone through so much.”