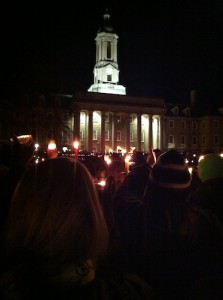 A candlelight vigil was held on the steps of Old Main Friday night to show support for the victims of sexual abuse, alleged to have been committed by former Penn State Football Defensive Coordinator Jerry Sandusky. This event, organized by students to show support for the abused children, was in memory of and in recognition of these horrible acts. An estimated 10,000 people attended.

The feeling at Old Main was very somber, as thousands of faculty, staff, students, community members, and visitors packed the typically huge open space to attempt to begin to come to terms with the events of the week. Several speakers spent time talking about what this week has meant to them and the community, but their words always returned to the need to focus on the victims of abuse. A student read an anonymous letter written by a fellow student who was a victim of sexual abuse. She concluded the letter by saying that she was “standing somewhere in the crowd, somewhere next to you.” She challenged the crowd to look closely and work to discover cases of abuse and to act.

Former Penn State All-American football player, LaVar Arrington told the crowd to use these events as a challenge. “Let it be known that we waged war to make a difference,” Arrington said. “Leave here tonight with a resolve and an understanding that you possess the power to change things.”

Penn State senior and organizer Jessica Sever said she felt as though something needed to be done to put the focus back on the victims, not President Spanier or Joe Paterno. “What I really want to focus on is the victims right now,” Sever said. “We really need some positivity, because there is none right here.”

Following the speakers, the Old Main Bell rang 10 P.M. and the crowd joined in a moment of silence. The silence of the evening was interrupted only twice. The first when the crowd locked arms and sang the School’s Alma Mater. The second was an explosive series of, “We Are … Penn State” chants that ended moments later with just a chant of “Penn State.”

Over the past week the reactions of the Penn State and State College communities has been a raw mixture of shock, anger, violence, sadness, disbelief and reflection. This candlelight vigil seemed to be the beginning of new direction for the students of Penn State, one of recognition and resolve.

In support of the sexual abuse victims of this tragedy, and all victims everywhere, the Penn State Community around the world has, as of this posting, donated $238,000 to RAINN. The Rape, Abuse & Incest National Network (RAINN) is the nation’s largest anti-sexual assault organization. This is a grassroots effort and the total donated to date represents the sum total of individual spontaneous donations contributed through #ProudPSUforRAINN

Portions of this report were taken from Onward State. Onward State, is a student-written independent online news source for the Penn State community. The Bloomsburg Daily thanks Onward State for their kind partnership and permission to repost their content.