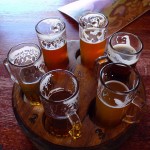 Everyone (including us) moves pretty quickly during the week. On Sundays, it’s nice to take a little breather. The Sunday Slowdown column will feature links, stories, articles, videos, or other interesting things that our writers find during the week. We will all contribute and try to share things that we find interesting, thought-provoking, and sometimes even a bit silly. But remember: this is community journalism, so if you find interesting things to share, make your voice heard and share with us at info@thebloomsburgdaily.com.

If you take a drive around the area, it is quite easy to see that brew pubs are the places to be. We now have the Berwick Brewing Company, Marley’s Brewery, Old Forge Brewing Company, and Turkey Hill Brewing Company where interesting, locally-crafted beers are made and enjoyed on site (or taken home in growlers to be enjoyed later).  The trend seems to have been born from an increase in home brewers who pursued the craft as hobby and then realized there was a market for more complex beers.

Why has it happened in the last ten to twenty years especially? Homebrewing was illegal in the United States until 1978, when President Carter signed a bill that repealed prohibition-era, federal restrictions on making small batches of beer and wine. So hobbyists turned into professionals and beer drinkers who were fed up with insipid, watery “macrobrews,” were happy to become customers.

Up to this point, the vision you are probably crafting in your brain is one of hulky men lugging sacks of grain, brewing beer in their basements, and then consuming it with other men.  But women actually play a large role in both the history and consumption of beer.  A recent article in Slate, “The Hops Ceiling,” talks about the role women have played in beer making, as well as the challenges they face attempting to break into the industry that they essentially created.

Four-thousand-year-old Mesopotamian clay tablets describe the brewing process in a hymn to Ninkasi, the Sumerian goddess of beer. From ancient Sumeria through medieval Europe, women ruled the kettles. Beer can be described as liquid bread, so there was nothing unusual about women using their baking ingredients to brew in home kitchens. It wasn’t until entrepreneurial women began to sell their beer that men really moved in, restricting the creation and sale of beer to powerful male-only guilds.

As someone who both cooks and enjoys beer, I find it interesting that so many responsibilities, when considered only “domestic,” are relegated to women.  And once those responsibilities have commercial potential, they become male-dominated. The professional chef versus the home cook is the perfect example; cooking is the job of most women at home, but women have an extremely hard time breaking into the chef role in restaurant kitchens.  Brewing beer is apparently no different.  We come to find out that women not only like to drink beer, they like to brew it too.